As I sat to drink my morning coffee, I swiped on my Ipad and up popped my Safari search for, "How to make homemade spaghetti sauce less oniony."

Yep, that was my word for word search, embarrassing I know! I'll explain...

This week I made homemade spaghetti sauce in an attempt to avoid driving to the grocery store for Prego. Spaghetti is one of the easiest, fastest, go-to recipes in my repertoire...unless I'm making the sauce from scratch! I thought I would save some money and use the ingredients in my pantry and fridge. I pulled out a large can of crushed tomatoes, a yellow onion, minced garlic, garlic powder, salt, pepper, and Parmesan (the kind that sprinkles out of the can). This sounds good to you, right!?

First, I dripped a little olive oil into a sauce pan, oops ... you don't use oil to brown beef and I know that! So, I used a hamburger bun to blot out the oil and simultaneously prep garlic bread to go with our delicious Italian dinner. Next, I plopped a large handful of ground beef into the much too hot sauce pan and began to brown/blacken the meat. Haha, I have to laugh a little when I think back to this evening in the kitchen! So, as the meat was browning, I turned to the blender that I pulled out to create the sauce!

I decided to use the blender, rather than just pour the ingredients into the pan like I usually do, because my husband likes really thin sauces. A can of crushed tomatoes, a whole onion, and spices go into the blender and I puree them. His mom says he used to strain the Ragu when he was a kid, thank gosh that isn't the case anymore. That being said, I really wanted to make this sauce special, nice and smooth, in order to surprise him. He was surprised alright!

When I added the sauce to the browned meat it instantly didn't smell right.  My first thought, were the tomatoes bad? Nope, they shouldn't be.. so what was so different this time!? I thought about it and realized the onion was a little stronger than usual. OMG, I cannot believe I put a whole (small) raw onion into the blender! What was I thinking. I always chop onion really fine and sauté it with the browned meat before I add the tomatoes. In my attempt to make a sauce special for Zach, I had created the worst smelling spaghetti ever. I had to quickly decide.. do I save this or do I scratch it all and make skillet burgers quickly before he comes home!? I didn't want to give up, hence the Safari search on my Ipad. Other people have had this problem too! Whew, I'm not the only one, and second Whew, I think I can save it!

I added some brown sugar to the sauce and turned the heat up to let this stuff simmer until dinner. Online it said when making your sauce from scratch people generally let it simmer a long time, I did not have a long time.  Even though there wasn't the delicious aroma generally thought of when cooking spaghetti, it was a little better and it tasted pretty darn good! I saved it just in time, Zach walked in the door and we sat down to dinner. I was a little nervous and warned him we may be making hamburgers if he didn't like the spaghetti, that I had made the sauce from scratch.  I tried it and watched as he hesitantly took his first bite...he said it was good! He wasn't going to say anything about the smell when he came in but he had noticed it smelt a little unusual...nonetheless, it actually tasted pretty good. He even took leftovers to work the next day!

the silver lining:
I am relieved that I learned my lesson on cooking with onions and I think I'll leave the blender out of the equation next time! But most of all, I love that my husband is such a trooper through my cooking trials and tribulations!

Here are a few more cooking fiascoes and lessons learned
in my real life kitchen:
(maybe I should actually stick to a recipe rather than concocting my own!) 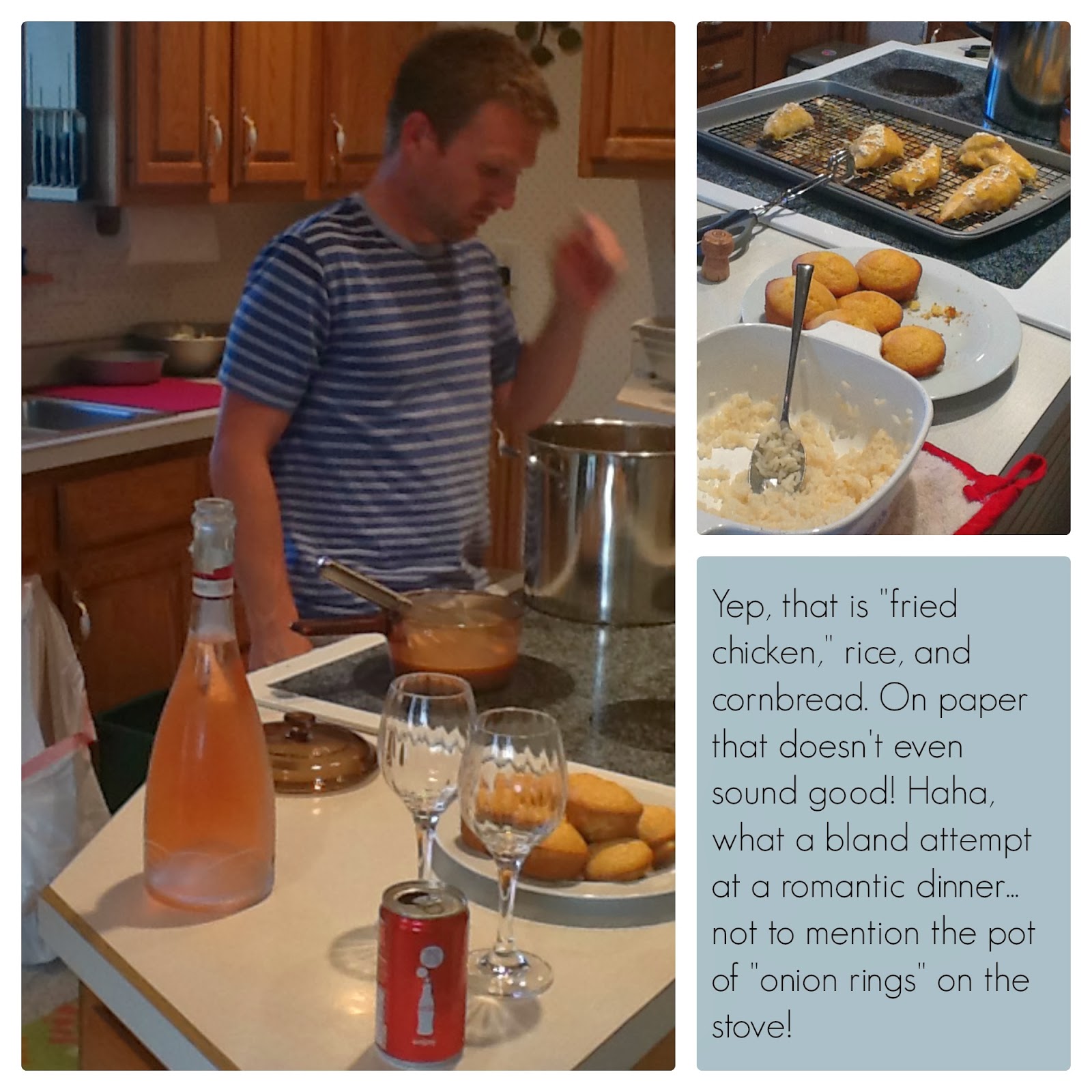 My first attempt at making a romantic dinner at the farm was fried chicken, which I used a packet of breading mix to batter. The packet said to add water to the mix and dip the chicken in the mixture... it probably also said to then dip the chicken in the dry mixture before frying. I missed the later part of the instructions, so my chicken looked gross! Don't worry, I know that sprinkling the dry mixture on top of the chicken after it was cooked did not fool anyone! As for the onion rings in the large pot on the stove, we won't even go there. The only romantic thing about this dinner was that my husband sat down and ate it with me. I'm just glad we had the bubbly to make laughing at the situation a little easier! (It didn't taste as bad as it looked!)


The night after our fried chicken episode: 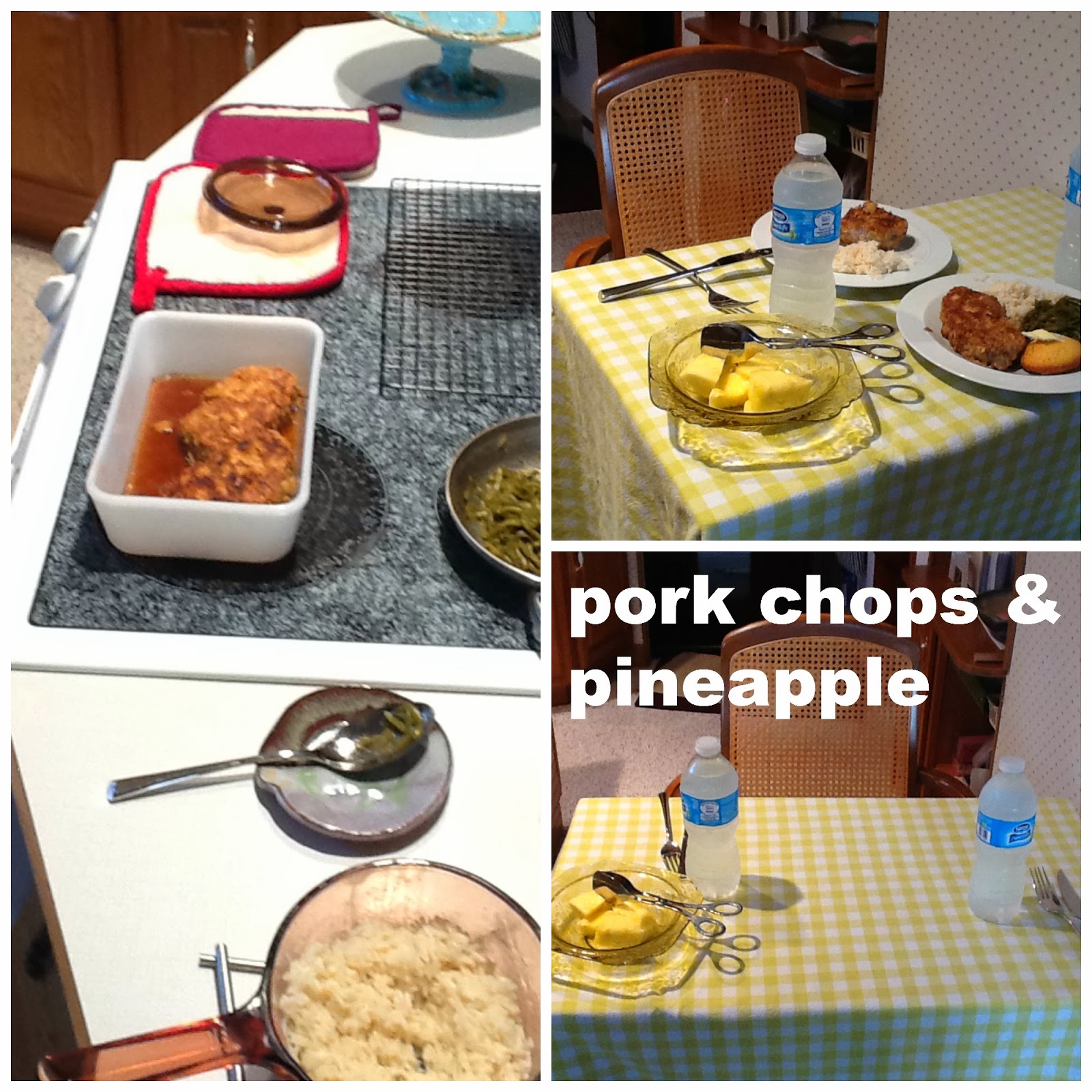 The pork chops were a little over done but this was amazing in comparison to the night before! At least I'm making rapid progress!!

A look at Mom's Pizza vs My Pizza: 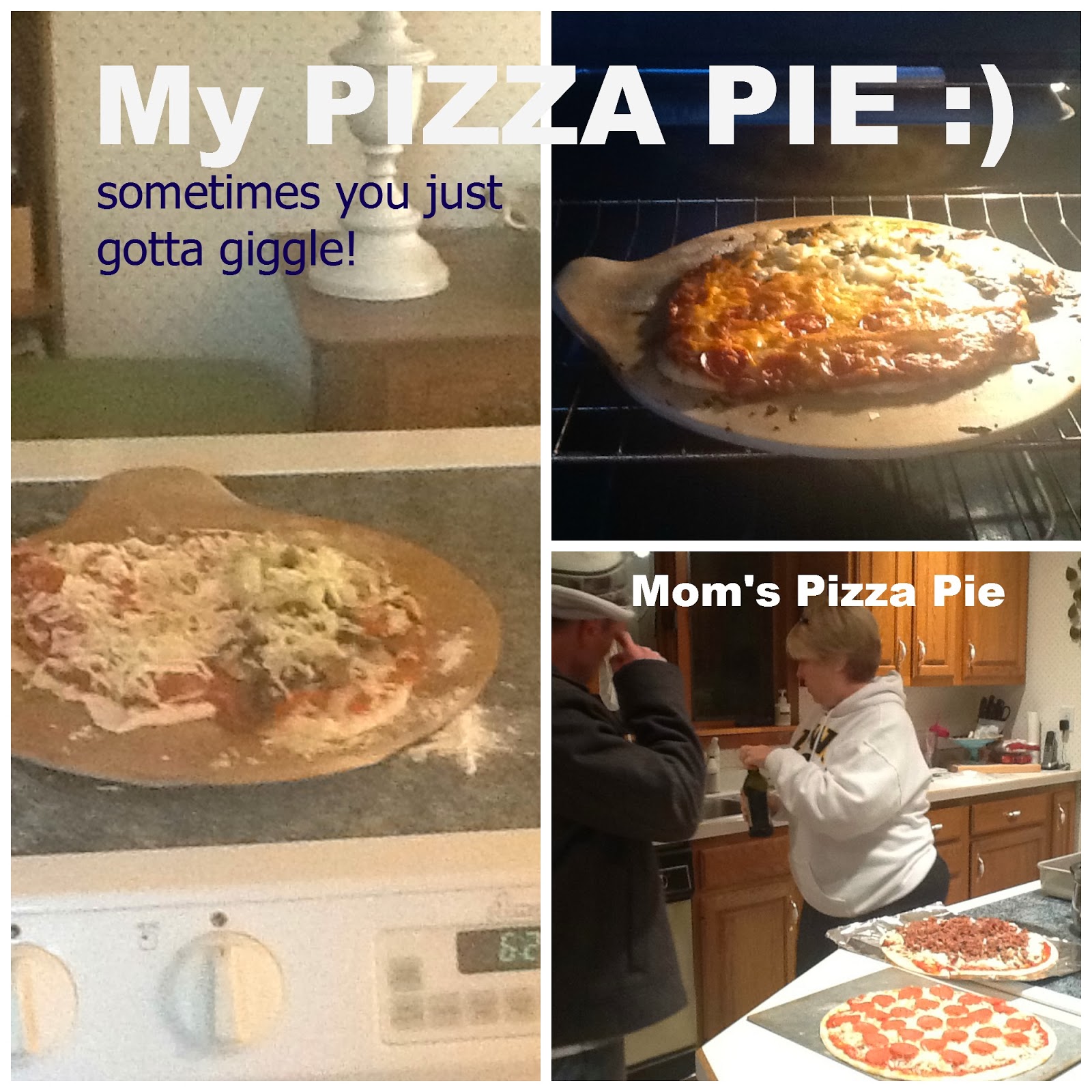 In real life, things aren't always photo worthy but they can still be yummy! Mom's was definitely better this time! 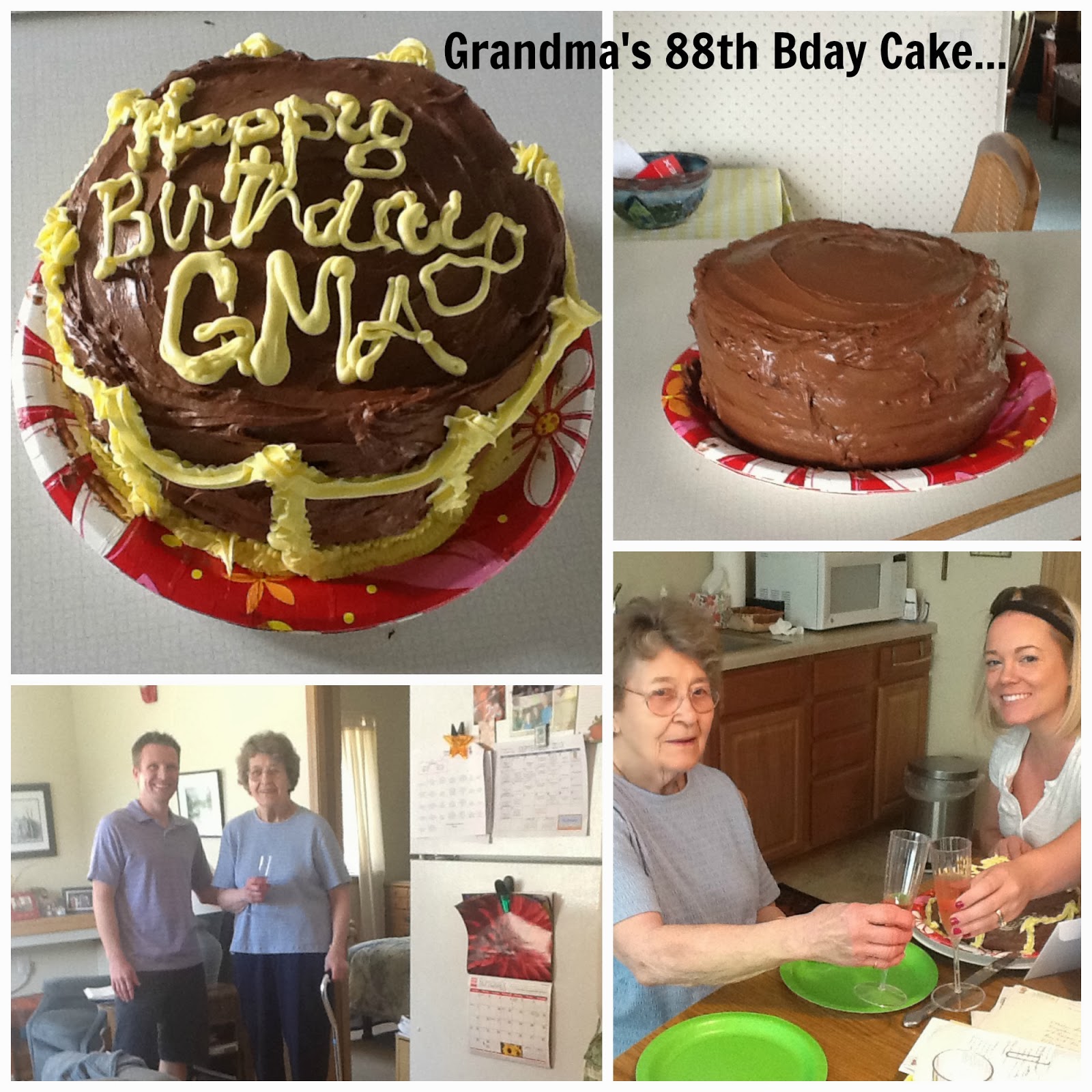 The top of this beautifully decorated birthday cake slid halfway off before I made it to Grandma's. Fortunately, she was thrilled with it anyway! She said she hadn't had a birthday cake in ages and that it was beautiful! I think she liked the company and strawberry wine too! ♥ Beauty is truly in the eye of the beholder. The cake wasn't beautiful to me but the memory sure is.


And Last but not least: 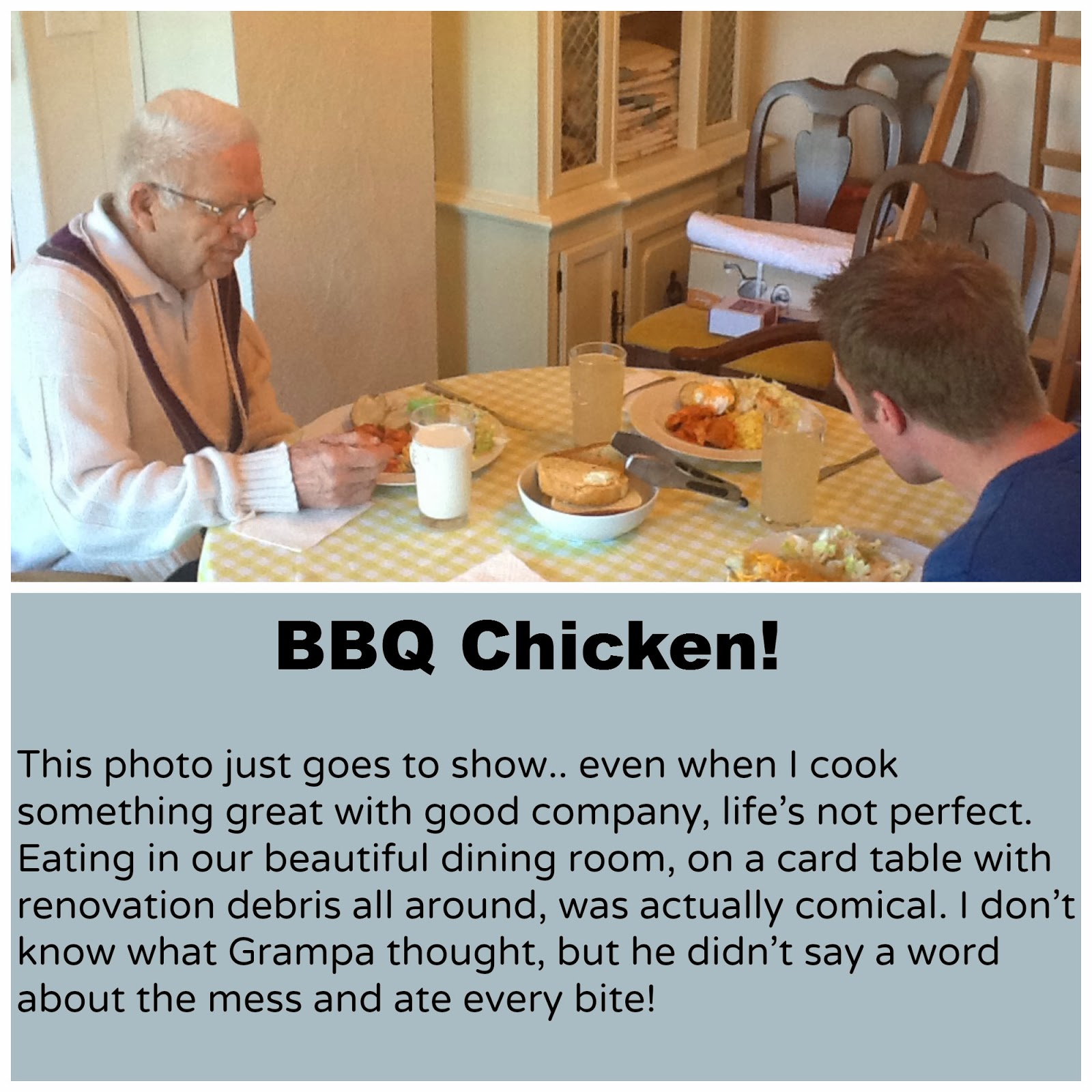 I hope this silly post about real life
in our farmhouse kitchen brightened your day.

The magic and beauty in life is revealed
when we embrace life's imperfections
and find the silver linings in our daily downfalls. 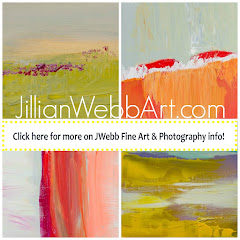